The town of Healesville was surveyed in 1864 and the first land grants were made in 1865.

They included the Yarra Gables site, which was part of a 775 acre land grant to James Sullivan.

Sullivan was born in Ireland, served as Mayor of Bendigo, was a Member of Parliament and Cabinet Minister.

Sullivan died in 1876 and his executors sold 367 acres to James Steel, who owned the property until 1909, and built the main house, known as Marna House.

In 1920, Marna House and three acres of land was sold to John Furneaux.

In 1932 it was sold to James Challinor who established it as a guest house and it was a popular tourist destination for the next thirty years.

The guest house had an asphalt tennis court and croquet green, along with electric light and hot and cold baths. The wide verandas were used for dancing.

The property was expanded and in 1940 could accommodate 50 guests.

In 1953 it was sold to James and Elsie Henderson.

The 60s saw a decline in guest house accommodation due to the increasing ownership of motor vehicles and the development of new motels.

In 1966 it became “Marna Home – for pensioners”. It was promoted as a supportive care home for the elderly and young alike, with a friendly and homely atmosphere.

Marna House later became a “special accommodation” property until 1995 when it was closed.

It was purchased in 1997 by Jeff and Raelene Spencer who set about establishing the motel and restoring Marna House. Yarra Gables Motel opened in 1999.

In 2014 Jeff and Raelene retired and sold the motel to Ralph Henderson and Helen Wood, the current owners.

Left: Marna House when it was a guest house, with the croquet lawn in the foreground. Right: James Forrester Sullivan (1817 – 1876), the first owner of the site of Yarra Gables Motel. 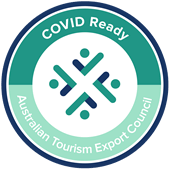